Despite the persistent fact of same-sex sexuality, throughout nature and around the world, homosexuality is described as strange. 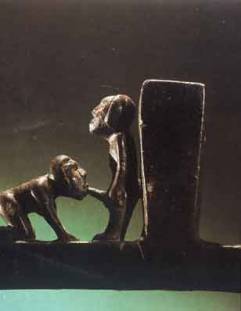 “To treat the world as ‘strange’ is to open up the possibility of wonder, to speak also with the impenetrable space between the words in our language.”[1]

Queer difference separates us from ordinary life, and we become strangers in our families and communities. In myths and legends, a stranger at the door symbolizes the immanence of change. He is often the one destined to replace the king, and so he represents social upheaval, the future made present.

In the symbol of the Stranger, we can see how homophobic stereotypes are interwoven with racial stereotypes. Racism – like homophobia – can be described as an attempt to fix and naturalize the difference between belonging and otherness.[2] Despite the proof supplied by genetic researchers that race is not a biological fact, it remains a social fiction with enormous consequences. Pigmented people are treated as strangers who symbolize social upheaval and threat. The symbol of the Stranger invites us to link queer liberation with anti-racism. It asks us to embrace an identity and an activism in which difference is celebrated and sought.

Shadow: Today we encounter innumerable mass-media representations of queer folk. On the one hand, homosexuals are strangers – represented as evil, secret, savage, self-hating and socially isolated. On the other hand, they are accorded an opposite image – straight-looking, ignorable, born-that-way, white, middle-class and sexually deprived. We are urged to internalize these options, shame queers who do not conform to the blandest stereotypes, and hold a secret sense of wrongness for whatever part of ourselves resists coercion.