In contemporary Western culture, homosexuality is a symbol of a secret identity, a hidden potentiality, a mask. Harry Hay describes how we pull the green frog-skin of heterosexual conformity over ourselves to get through high school with a full set of teeth.[1] And homosexuality is an identity that is always possible. Ours is an identity that lurks inside, and might just rub the thighs of our fiercest enemies. 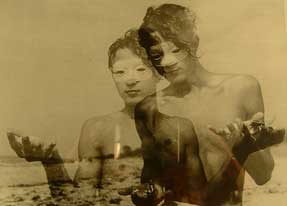 Disguise is linked with gender transgression. In Africa a mask worn by male dancers of the Yoruba tribe depicts a woman in childbirth. In the American Southwest, Coyote transforms himself into a woman so he can make love to a beautiful man. It is not until he gives birth to coyote pups that his true nature is revealed.

Instead of dwelling in the suffocating blandness of heterosexist conformity, queers create space where people can don masks and discard them. Women on stilts, men with beards and skirts, dykes on bikes, bears, clowns, slaves – all are brought into the mesh. Contemporary queer culture creates carnivalesque space in steamy bathhouses, dark catacombs, and marvellous festivities of GLBTQ pride. Carnival honours the phantasmagoria of the subconscious. When we incorporate the carnival’s magic into the culture we create, we proceed from our inmost images.

Hidden behind the mask, protected by judicious disclosure, each queer person can cultivate the secret garden of a rich inner life. Culture and soul can flourish in this protected zone of silence.

Shadow: We go seeking acceptance for our difference disguised as ordinary men and women. If we are not careful, the mask becomes the face; Clark Kent will never use his powers.