The association of evil with homosexuality is widespread and thoroughgoing. Sexual lasciviousness, disease, treason, cowardice, the abuse of children, the contamination of blood – every imaginable evil is linked with homosexuality. We are accused of acting against god, nature family values, the national interest, evolutionary logic …. Henning Bech comments, “there is no evil which the homosexual cannot embody.”[1] 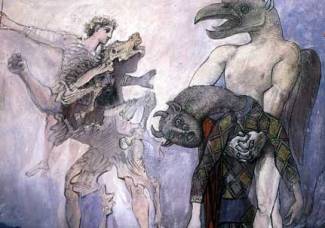 Pablo Picasso, Scene from the Minotauromachy: Minotaur’s Body in a Harlequin Costume, 1936

The concept of evil, as we understand it, is unknown in traditional cultures around the world. Almost all other world views suggest ways to incorporate the shadow, pay homage to destructive forces that shape both inner and outer realities, and envision a unity of self and world. Christianity explicitly repudiates the possibility of communion with chthonic deities and the unconscious, consigning all that is other and evil to hell. This world view speaks of both an imperfect individuality and an injured collectivity that queer calls us to heal. Queer identity requires the cultivation of individual freedom in the face of tyranny. Queer community asks us to live in a web of radical relatedness. The simultaneous flowering of individuality and community is inimical to evil – or at least, to the greed, cowardice, and failure of love that typify the contemporary world.

Shadow: Queer is deeply suspicious of any moral stance. Our suffering and exile are evidence that conventional morality is bunk. Virtue is a ruse that makes slaves content to serve. Values alibi inequities. This kind of cynicism at least can free us from the endless treadmill of seeking acceptance. No longer constrained by a need to fit in, we can fly out, and explore the far reaches of queer identity. There is a danger. When we care less, we could be careless. Exiled from the moral majority of fools and bullies, we could pretend to self-sufficiency, admit to needing nothing at all. But if we pretend not to ask and refuse gratitude for the crumbs we are given,[2] we fail to live the paradox of dependence and independence. We cannot be fully independent until we are enmeshed in and supported by a community. We achieve an altruism of living-for-others when we speak for and through our uniqueness. And it is when we give ourselves away in love and community that we come alive to our selves.