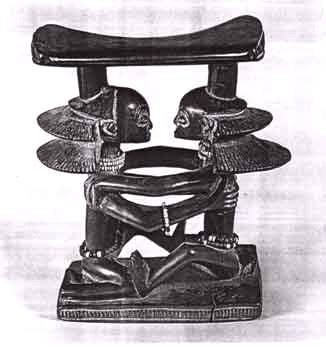 Carved wooden headrest of the Luba people of the Congo

“But I will not agree to be tolerated. This damages my love of love and of liberty.”
– Jean Cocteau [i]

Homosexuals are outcasts and scapegoats for contemporary society. We carry the sins of the people into the wilderness, outside the limits, to the margins where we are made to dwell. This exclusion is not just involuntary; it is always also constituted by our escape and refusal. Queer is a form of resistance. Moreover, it is a form whose content is inexorably shaped by this resistance. Every image, pattern and archetype that reflects or evokes queer identity takes meaning from transgression. Queer is outside, distant to and different from the normal, expected modes of life. Exceeding limits, opening boundaries and dissolving stable identities are all functions of homosexuality. As an attitude, orientation, ethos and ontology, queer escapes closure.

Queers represent the liminal realm. We stand on the threshold, leaving one space and not yet, perhaps not ever, entering another. The Greek god of limits and thresholds is Hermes. He presides over crossroads, communication and homoerotic love. He mediates between men and gods and guides souls from this life to the next. Lodging in the space between established alternatives – male and female, visible and invisible, possible and impossible – queer people stand at the crossroads. We guide souls from the constricting limits of what is, to the unknown, unknowable, but nevertheless yearned-for possibility of going beyond this.

If so much of the meaning of being queer derives from our transgression of established norms and boundaries, what happens in those few places where homosexuality is at least partially accepted as a mere difference in taste? In Canada, a decline in the prestige of the family has created conditions for the legal recognition of same-sex relationships as a kind of family. Can we envision a utopia where homosexuality is an ordinary and accepted lifestyle choice? Do we look to the disappearance of queer meanings in places and times where same-sex lovers can live quietly, without fear, or at least without any more fear than anyone else? In the almost unimaginable event that homosexuality is seen as only a matter of taste, like preferring pineapple to potatoes, then opportunities for being queer are divided even as opportunities for homosexual experience are multiplied. Queer is so much more than sex or relationship. Lesbian is an archetype that is stronger and weaker, older and younger than any lesbian. Gay is a dream and a promise that exceeds the limits of any individual, culture or community. If we always only aspire to tolerance and integration, then the mythic journey we bid the world to undertake will stop before it begins.

Where homosexuality is located as a different flavor or a niche market, it seems there is only another way of constructing a society deprived of homosexuality. We can be accepted, but only if the meaning and magic of being queer is evacuated. Such a society is safer, and certainly worth fighting for, especially if we can use these moments of relative freedom to construct and elaborate the queer space we yearn for. There our passion is not for tolerance or integration. We want nothing less than the complete homosexualization of society. We would open every life to the calling that being queer can signify. We would liberate all life to the great gay world we could be playing in. [ii]

In a queer world, there is no more evil. Evil has many forms, but they are all inimical to self-sacrifice.[iii] Fostering dependency, seeking control of others, and discouraging independence can be evil. Evil can mean succumbing to tyranny, failing to think and act for the self. And it can involve eschewing dependency, being self-ish, failing to live in relationship. Evil is constituted in a failure of love. Only love understands how the self finds its best expression in self-sacrifice – that is, only love as it is practiced by lesbian and gay people. Without evil, there can be no more whiteness. Like heterosexuality, whiteness is a system of dominance and disavowal that cannot exist in a world of love. Without evil, there can be no more gender as we know it. In a queer world, we could play with gender as a symbolic language and a creative resource, or we could abandon it utterly. And without evil, there can be no more childhood as we know it. In a queer world, both children and adults could be cared for and courageous, frolicsome and beloved.

A queer world is wild. Its most telling quality is aliveness. Being queer means being attuned and responsible to the intricate web of life. We live in community with plants and insects, animals and fish. We are alive in and dependent on water, earth, air, fire. Sensuous, intimate, elemental knowledge of the natural world shapes our being as queer people.

A queer world is created and creative. Becoming queer means surrendering to a higher power, following an inner spirit, undertaking a shaman’s journey to identity. On the way we learn to be shape-shifters. We develop capacities for self-invention and for silence. We use art, artifice and artificiality to make a home in the world.

Being queer will find its limit when the world is queer. This cannot only be when everyone savors the delicious taste of homosexuality. Homosexuality calls us to a world that would be unimaginable, if not for the magic, mythic journey of being queer.

[ii] James Broughton in Mark Thompson, 1987, (205), says “It is essential that gay politics keep eroding homophobia, but the most exciting task that remains is how we can persuade the homophobes what a great gay life all men could be romping in.”