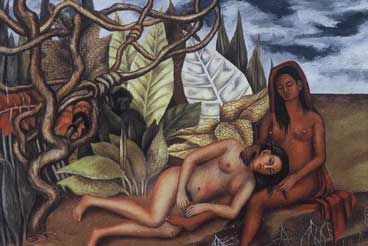 “The most alive is the wildest.”
-Henry David Thoreau[i]

“The mass of men lead lives of quiet desperation,” writes Henry David Thoreau. “From the desperate city you go to the desperate country, and have to console yourself with the bravery of minks and muskrats.”[ii]On the one hand, the city prevents wildness, buries it, paves it over and cuts it out. On the other hand, in the desperate country, nature exists as spectacle. There wildness can be admired, but not lived. Thoreau envisions a different way of living, possessed of the energy and complexity of wildness. In his journal, he describes the dream of a community of friends: “I have glimpses of a serene friendship-land, and know the better why brooks murmur and violets grow.”[iii]

“I could kiss your bones, put my teeth in you . . . I chew, beautiful one, I am in you . . . I have no boundary . . . I am perished in light, light filling you. . .carrying you out, through the roofs of our mouths, the sky, the clouds, bursting, raining. . . dispersed over the earth, into the soil, deep, deeper into you, into the least hair on the deepest root in this earth, into the green heart flowing, into the green leaves and they grow . . . .”[iv]

Love, joy, passion, friendship, the exchange of fluids without the assignment of roles, pleasure without possession: while others act out their dreary routines in the social and symbolic order, queer is a call to wildness.

In the Epic of Gilgamesh, written down near 2100 B.C., same-sex love is identified with wildness. Gilgamesh is a king with a restless heart. In his discontent, he keeps his people working, building mighty walls and high towers. He leads them into war. Gilgamesh is the type of restless, ruthless man who still is everywhere. The thick walls he wants to seal his city off from the outside world, the high towers that display his power, his aggressivity against the forest people and his own subjects – it is easy to diagnose the desperation. Gilgamesh is missing something vital. All his offense and over-achievement is compensatory. What he needs, the gods decide, is one who is equal to him: his other, his double, a friend. The gods send Gilgamesh a lover – to teach him humility, to be a true companion. Enkidu is a hairy wild man who sucks the milk of wild animals. The forest is his home. Gilgamesh takes Enkidu to the palace, and gives him kingly food and clothing. The two men love each other passionately, but Enkidu cannot stay long in the city. He leaves for the wilderness, and Gilgamesh follows. Forsaking all his wealth and power, Gilgamesh pursues his beloved friend. They live together in the forest, becoming more and more dear to one another.

The Epic of Gilgamesh can be read as a drama of the soul called to going wild. Wild means undomesticated, impatient of restraint, fierce, crazy, eager with desire, free. Wildness is life energy, the intricate wisdom of natural systems, instinct, anima (breath, soul). Call it what you will, it calls us – out and away from domestic spheres and human settlements, into the forest, down to the water, up the mountainside. Gays and lesbians partake of this wild nature.

For centuries, same-sex lovers have called each other “friends.” Our love mixes us up instead of pinning us down; it is the amity of equals instead of the enmity of opposites. We live despite the thousand prohibitions and permissions that enforce what a man is and what a woman is. Where we are, friendship is possible. We make space for each other, and it is space where we can be all we are becoming. Love lets us listen to a wild heart, find a voice to sing with, stretch our wings. Friendship calls us away from the city. The walls around us open. Towers seem trivial. What matters now? I / Thou. A friend evokes our own wild nature, demonstrates our kinship with plants and animals, carries us home. Home is outside the marriage, away from the marketplace, in the skin of a lion. Apart from the social order that presses us into service, love brings us to life.

“Family” is a word derived from the Latin famulus, meaning “servant.” The word connotes obedience. The word “friendship” evolves from the Anglo-Saxon freond, meaning “love.” “Friendship – such a boundless desire.” The Homomonument in Amsterdam honors homosexual experience with these words by the Dutch poet Jacob Israël de Haan. [v] the borders and customs agents, tariffs and duties of straight norms and gender expectations, friendship is boundless. We can soar, dive, and journey dark and deep – into the wildness of the world.