Homophobes work tirelessly to prevent gays and lesbians from having access to children. Many of us withdraw voluntarily from the children who could be in our lives. We shrink from the accusation that is always ready-to-hand – pedophilia! Scientific research proves decisively that there is no association between homosexuality and the sexual abuse of children. The authors of a recent study conclude that “a child’s risk of being molested by his or her [mother’s] heterosexual partner is over 100 times greater than by someone who might be identified as being homosexual, lesbian or bisexual.”[i] In fact, children may be safer around gays and lesbians. Gay and lesbian parents are less likely to physically or sexually abuse their children.[ii] A survey of child molesters found that none of them were homosexual.[iii] But queer has an association with pedophilia that resists the evidence of science. Over half of respondents to recent opinion surveys believe that gays and lesbians should be prohibited from adopting or even from teaching young children.[iv] The media, remaining silent on subject of child neglect, seizes avidly on each detail of the drama when a priest, coach or teacher is accused of same-sex sexual abuse. The spectre of the evil, predatory homosexual looms large in the cultural imagination. We are their worst nightmare. Without their constant vigilance, we might swoop down and abduct every innocent child. Perhaps we can learn to use these vast powers they invest in us. 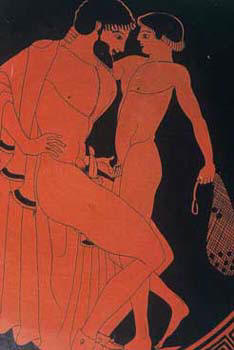 We might as well admit that pedophilia has a long pedigree within the history of male same-sex passion – much longer than the history of reciprocal, companionate relationships that are typical in contemporary Western queer communities. In other cultures, pederastic relationships are pedagogical. This was true in Ancient Greece. Will Roscoe writes of Japanese samurai warriors who followed wakshuto, the way of loving boys, and the Sambian people of New Guinea. In Greek and Roman mythology, the myth of Ganymede exemplifies the archetype. Zeus, king of the gods, was inflamed by a passion for the boy, Ganymede. Zeus transformed into an eagle and abducted the child, carrying him off to Mount Olympus. Once there, Ganymede became immortal, and he serves as cupbearer to the gods. “The myth of Zeus and Ganymede became an important wellspring for images of homosexuality in Western culture,” comments Will Roscoe.[v] In the Middle Ages, same-sex lovers called themselves Ganymedes. Historian John Boswell calls the period 1050-1150 “The Triumph of Ganymede,” noting the emergence of a “gay subculture” all over Europe wherein Ganymede appears in many guises, usually as a “representative of gay people in general.” “In several debates of the period he is a spokesperson for the gay side. . . .”[vi] 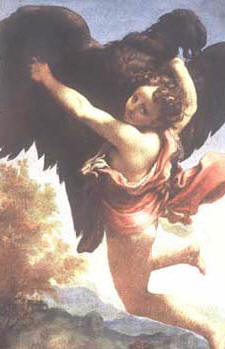 Correggio, The Rape of Ganymede, 1532

The notion of a powerful stranger (for eagle, read chicken-hawk) abducting a child who gladly serves him evokes automatic indignation today. “The child” imagined and created by contemporary Western culture is innocent, empty, helpless and sexless. Legally and morally, children are dependent on adult protection. Sex with children is posed as the ultimate taboo. Yet evidence of child molestation is uncovered everywhere. Child sexual abuse seems almost to be a characterizing trait of every cultural institution, from church through family. Child molesters lurk behind every tree, and might be there inside the secret heart of every loving teacher or parent. James Kincaid describes this as a “culture of child molestation,” in which children are eroticized and the erotic is infantalized. Every adult-child relationship is scrutinized for a punishable offense. No wonder then, children are unwelcome everywhere. People want movies, dances, apartment blocks, and even whole cities without children.[vii]

The protection of children has become a protection racket. Children are increasingly guarded, preserved from work and from contact with strangers, and kept close inside the confines of the nuclear family – where they are so much more likely to be abused than anywhere else. The sexual exploitation of children is only possible when they are trapped, abject and dependent. Families ensure children’s vulnerability and enforce their compliance. In contemporary industrial society, children have no autonomy. Parents are established as a child’s only source of food, shelter, measured affection and brutal punishment. Mothers and fathers are left isolated and without support. Shere Hite comments that the authoritarian, patriarchal structure of the family is designed to teach “that power and might are the most ‘real’ and important thing in the world.” [viii] Becoming queer despite our families of origin, we refuse this lesson. We escape the paradigm and prove the alternative. The African proverb “It takes a whole village to raise a single child” is the moral of every queer life story. We are nourished and sustained by nature, books, friends and fabulous strangers as well as – or in spite of – our family of origin. We predict a society released from the tyrannies and oppressions that create child victims when we defy the patriarchal nuclear family with our resilience.

As queers we are called to solidarity with other refused and stigmatized sexualities. In the early years of gay liberation, this meant advocating with young people for age of consent laws to be abolished. It meant support for “Men Loving Boys Loving Men.” [ix] Lesbian-feminists intervened on behalf of children. They pointed out that sex with children must be exploitative and profoundly damaging in a society where children are silenced and deprived of choice. Gay liberation lost its willingness to speak on child sexuality and pedophilia. We have been content to claim our distance and difference from these issues. In the culture around us, hysterical denunciation of child molesters grows shriller. Castration is advocated and practiced on offenders (as it was on homosexuals in the 1950’s). In B.C. in 2002 a man was hounded, vilified, arrested and prosecuted for his creative writing involving fictional characters described as minors.[x] A society that has become hypervigilant towards the rare incidence of the sexual abuse of children by strangers is willfully blind to the relatively common incidence of abuse and neglect by parents. Those who watch waiting to pounce on a hidden pedophile seem content to ignore the all-too-evident children who are hungry, homeless, without clean water, education, or medical care. If GLBTQ liberation is to move us anywhere outside the predictable parameters of acceptability, we need to advocate for the empowerment of children.

Within the archetype of initiation exemplified by the myth of Ganymede, boys become men by having sex with them. In contrast, contemporary Western culture has it that manhood is produced in boys precisely through their repudiation of homosexuality. Being a man means becoming stiff and impenetrable. Little boys are taught to close up their orifices and close down their vulnerable emotions. They are pulled away from their mothers and the world of women. The world of men seduces them – bloodlessly – to an ideal of masculinity, and a realm of power which they can access by approximating the ideal. And it scares them. Torture, rape, bashing, murder, social ostracism, psychiatric mistreatment, poverty and marginalization are among the punishments meted out to boys who refuse to assume the masks and postures of masculinity. In the construction of gender, the erotic component of man-boy relationships is forced underground, made into a terrible secret. When pleasure between boys and men is impermissible, the assumption of manhood is made problematic, provisional and disturbed.

Lesbians have been leaders in fighting against the sexual exploitation of children and breaking the silence that surrounds it. Yet we have not flinched from acknowledging the erotic aspects of a mother’s relationship with her daughters, of “female friendship and comradeship” (Adrienne Rich),[xi] and of “the sharing of joy, whether physical, emotional, psychic, or intellectual” (Audre Lorde).[xii] Being and becoming a woman has little to do with relations between women. Girls are “made” into women by submission to heterosexual intercourse.[xiii] “Woman” names a relationship with men and heterosexuality. And precisely because relations between girls and women take place at the margins of society, without language or consequence, they retain an erotic capacity. “The interplay of desire among women’s bodies, sexes and speech is inconceivable in the dominant socio-cultural economy,” Luce Irigaray writes.[xiv] This interplay of desire exists, nevertheless, and not only in the behavior and relationships named homosexual. “The lesbian continuum,” as described by Adrienne Rich, implicates all women – “from the infant suckling at her mother’s breast, to the grown woman experiencing orgasmic sensations while suckling her own child . . . to two women . . . who share a laboratory, to the woman dying at ninety, touched and handled by women . . . .”[xv] Caresses across surfaces – be they of lab or labia – free exchange, pleasure without possession, intergenerational bonding: the lesbian continuum evokes the possibility of a “pedophilia” through which we might re-imagine childhood. 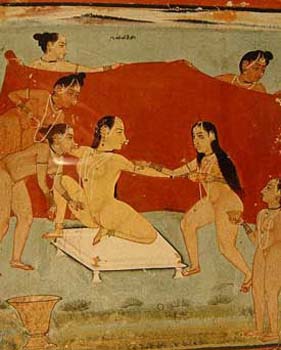 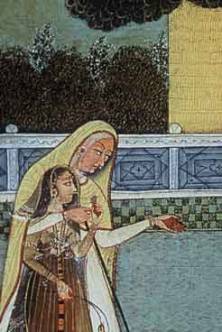 [vii] Children’s sexual play and experimentation is happily accepted in other cultures (See C. S. Ford and F. A. Beach, 1951). Even here, where child sexuality is not supposed to happen, Alfred Kinsey reports 57% of adults he interviewed admitted engaging in some form of pre-adolescent sex play. In most recent representations of children, their interest in sex is denied, punished, and taken as proof of abuse. Typically, a parents’ guide to harassment and abuse in sports cautions that “sexualized behavior in children is the result of sexual abuse.” (What Parents Can Do About Harassment and Abuse in Sport, compiled by Marg McGregor, Executive Director, Canadian Association for Women and Sport and Physical Activity, available on the internet.) But to say that children can be sexual is not to say that pedophilia is tolerable. See, on the following page, that I believe adult-child sexual contact is always exploitative in a society where children are silenced and deprived of choice.

[ix] The title of an article in The Body Politic, a Toronto magazine, which led to police raids on the publication, 1980.

[x] The recent Supreme Court decision in the Robin Sharpe case allowed his writing, though he was sentenced for possession of photographs (taken by himself) of children engaged in sex with one another and with adults. Sharpe’s acquittal on the grounds of artistic merit provoked wide public outrage, leading the federal government to consider new legislation removing the artistic merit defense in child pornography cases.