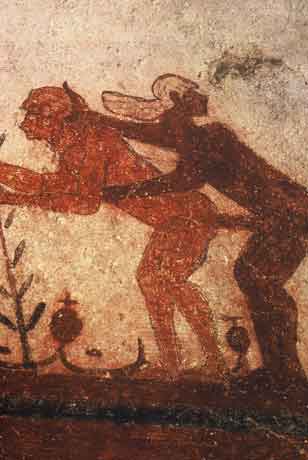 “People invent categories in order to feel safe. White people invented black people to give white people identity. . . . Straight cats invented faggots so they could sleep with them without becoming faggots themselves.”

Wait until dark. After nightfall, in the shadows, under the earth, at the bottom of the river, before the beginning and after the end of life, darkness waits for us. Sweet, secret, fearful, fecund: the dark holds and hides us. The vampire wakes. The carnival begins. The thief dons a mask. Dreams envelope us in unacknowledged urgencies.

Darkness is the time and space of homosexuality. Queers play in the shadowy, secret spaces inside and outside ordinary life. Homosexuality is disowned, repressed, forgotten, denied – and visited surreptitiously after dark. Heterosexuality is posed as the benign norm, the majority choice – a sexuality of bright-lit rooms and conscious knowing. Normal, ordinary, unmarked, unremarkable – heterosexuality is a name for closing in around emptiness. It was not always so. Historian Jonathan Katz finds that the term “heterosexual” was first used to describe a pervert – someone hypersexual and bent on pleasure, instead of reproduction. The contemporary meaning of “heterosexual” evolved through the late 19th and early 20th century. First homosexuality assumed its present meaning, and homosexuals became a described and reviled minority. Then heterosexuality was posed as a term for homosexuality’s opposite – the unstudied, unmarked majority. Katz shows how heterosexuality comes to mean an unquestioned norm and unscrutinized posture with power-over and difference-from homosexuality in an historically specific system of superior and inferior pleasures. The concept of heterosexuality has no meaning and no power without the looming specter of homosexuality.

Through the concept of heterosexuality, opposite-sex eroticism is drained of darkness, deprived of the capacity for sin and transgression. When men and women clutch each other, they understand their passions as normal, natural and inevitable. Perverts are other people – anyone who looks outside the limits. Heterosexuality is an identity that consigns the nightmare and the Beast to an other, or to an inner darkness harboured with dread and yearning.

Whiteness also names a normative space. White racial identity only has meaning in power-over and difference-from non-whiteness. David Roediger describes whiteness as “the empty and terrifying attempt to build an identity on what one isn’t and on whom one can hold back.”[ii] Whiteness also took its present shape in the 19th century, when race was bedecked with the new evolutionary science, and posed as an immutable fact instead of a violent and volatile regime. Whiteness invented a phanstasmagoric unity between the warring peoples and classes of Europe – at least in North America – while Europe was torn to pieces with class conflicts and inter-national warfare. Identifying with whiteness conferred enormous privilege. The wages of whiteness included property, food, mobility, suffrage, access to medical treatment, the right to territory. The obvious material benefits were supplemented by “a public and psychological wage,” W.E.B. DuBois pointed out in 1914.[iii] The price of the ticket was forgetting or denying darkness and becoming white. The complexities and divisions that make up anyone’s identity got closed down to this: are you light enough to pass as white, or not?

Historical and economic roots nourish the culture and psychology of whiteness. Whiteness is white bread and process cheese, vanilla sex, the absence of suffering, the sound of silence. It is a culture Roediger describes as “the absence of culture.” It is a psychology of empty minds and pitiless hearts. Amnesia, denial and evasion are constituent elements of whiteness. Like heterosexuality, whiteness is constructed by the disavowal of darkness. Blood, earth, sin and shadow are ascribed to racialized others. James Baldwin comments, “The white man’s unadmitted – and apparently, to him, unspeakable – private fears and longings are projected onto the Negro.”[iv] Whiteness belongs to daylight hours, well-lit streets and conscious knowing. Chaos, compulsion, the nightmare and the Beast are consigned to an other, or to the inner darkness that is white racial identity’s unacknowledged burden.

Baldwin urges white people to meet and embrace their inner darkness, if they would be released from its tyranny. “The only way [the white man] can be released from the Negro’s tyrannical power over him is to consent, in effect, to become black himself, to become a part of that suffering and dancing country that he now watches wistfully from the heights of his lonely powers and . . . visits surreptitiously after dark.” Baldwin calls us to admit the refused shadows and integrate the Beast that whiteness projects onto an other.

The material relations of racism implicate white people in guilt and shame. But whiteness is constituted by the denial of guilt and the repudiation of shame. Pretense, disavowal and forgetting create the privileged space of white racial identity. So white-identified people are singularly unprepared to confront reality, and to change it.

Whiteness and heterosexuality, with their refused shadows and dearth of darkness, are entwined identities and modes of being. Queer lives could be “sites of resistance to the reproduction of racism” (Ruth Frankenberg).[v] But the ideologies of sex and race circumscribe the positions from which we act and infect the images in which we dream. We claim homosexuality is normal and ordinary, instead of allowing our boundless perversity. We pursue the right to marry, instead of a broad vision of social and economic change. Being included in the existing culture – television! – is valued over making a new culture that honors the precious, distinctive and radically transforming aspects of our lives. Homosexuality is whitewashed. Racism is tolerated in queer communities. Gay identity has little appeal for many homosexually-active, non-white men and women.

Queer people who identify as white, without critiquing whiteness, are bound to retreat from each possibility and promise that being queer contains. Whiteness cannot be transcended by paying lip service to multiculturalism. We must take responsibility for white racial identity, and fight it at each place it enters our discourse and our dreams. Homosexuality can be one way to dismantle whiteness. We can use our capacities for transgression to imagine radical alternatives and create new worlds. We can forgo our claim to power in favor of a passion for justice. Instead of projecting our own darkness onto others, or onto marginalized aspects of the queer community, we can reclaim the disowned self and “become black.” We undermine the psychic space of both whiteness and heterosexuality when we eschew normalcy, and love the darkest aspects of self and world, world and self.