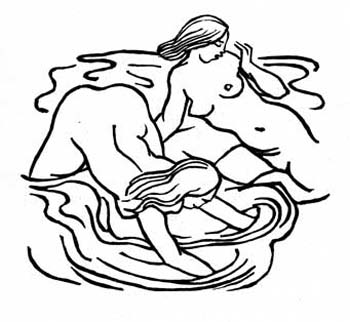 Aristide Maillol, woodcut, illustration for The Odes of Horace, c. 1918

The Inuit goddess who lives at the bottom of the sea was once a woman who refused to marry. Her angry father chopped off her hands, which fell into the water and miraculously transformed into seals, walruses, and whales. Sedna herself fell to the ocean floor, where she lives forever, guarding the creatures who came from her fingers. She is the most powerful goddess, with authority over our destiny. Her wild, matted hair is thick with the blood of animals killed by hunters and fishers. The wicked deeds of humans infest her hair like lice.

Sedna tells what happens when we do not acquiesce to woman’s social role and her place in the symbolic order. When we are lesbians, we are punished and expelled from human society. Literally or symbolically, we sink out of sight. When we will not serve men, our hands are cut off. Our work is inhibited, our independence crippled, our capacities denied. But lesbians are unstoppable. Amputated hands become sea creatures – magical, mysterious, independent souls in their own right. Fingers slip deep inside the smooth, wet darkness beneath the surface of things. Thumbs come up for air, and dive again into deeper water.

Despite Sedna’s powers she is infested by human wickedness, and so are we, the lesbians. Though we are infinitely deep and immeasurably wide, we cannot ignore the mean measures of our origins. We mostly come from families where ordinary life separates human beings into men and women. We do not fit in. We know the preposterous quality of sexual difference. We see the coercion masked by it. We each spill some of the blood shed in enforcing it. 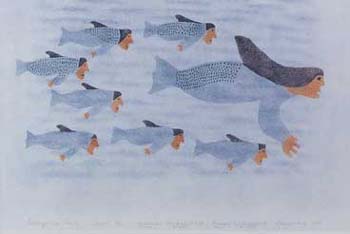 We see how little girls are prevented from becoming active, desiring subjects. We experience the same perils that convince women to assume the passive aims of femininity. We lick the very wounds that keep them yoked to fear. And yet we are not and cannot ever be women. Monique Wittig comments, “The refusal to become (or to remain) heterosexual always meant to refuse to become a man or a woman, consciously or not.” She continues, “what makes a woman is a specific social relation to a man . . . .”[i]Woman is one element of a two-gender system – created by her envy, her service, her powerlessness. Lesbians escape this fate. Yet we cannot escape being marked, like a woman, by the designation of sexual difference. It is the phantom pain inside our amputated limbs.

It seems lesbians are bound to work tirelessly for women’s freedom. We are often the foremost providers of liberating services to women. Wherever there are battered women’s support services, birth control and abortion services, and women’s cultural services, there are lesbians. And yet, Wittig writes, “it would be incorrect to say that lesbians associate, make love, live with women, for ‘woman’ has meaning only in heterosexual systems of thought and heterosexual economic systems.”[ii]In Chinese calligraphy, as in American advertising, “woman” is written as “person with a broom” or “person with a son.”[iii] Wittig argues that ‘woman,’ like ‘slave,’ is a concept that cannot be rehabilitated and ‘lesbian’ is proof of its insufficiency. Our refusal of the social consequences of being women constructs an escape route that can be followed. Or women can sit tight, confined by the awful restraints – or perhaps even placated by the meager rewards – of being female. 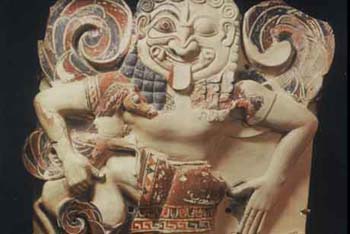 Man assumes all the power in our culture, but who would be a man? Certainly not lesbians. Gay men, too, escape this fate of the master and his vulnerabilities. “Man” cannot be without “woman” to guarantee his subjectivity by her service, his wealth by her work, his authority by her abjection. The whole creaking edifice of gender cracks and crumbles when we undermine it by being queer.

Lesbian and gay existence shifts sexual difference from the realm of biology, where male and female interact in lifeless unity. Slipping out of sight, we prove an alternative. We show that male and female are not facts that quietly and irreversibly emerge from the realm of nature. These are social identities, carved out brutally by history. They are enforced and exploitative economic relationships. Homosexuality demonstrates opposition and invites resistance.

All our lives, we hear from the homophobes that women who love women are not real women, and men who love men cannot be men. Instead of, or as well as, claiming the opposite, we can celebrate this truth. Queer means we withdraw our consent from the sex-gender system. We refuse its processes and values. When love draws us back to the constraints of ordinary life, we need not forget our capacities. Does it constitute a service, if we always keep silent? Exiled and escaped, we learn to dwell outside, beyond, above and below the opposite poles of sexual difference. In place of the dreary, static identities assumed by male and female, we become both and neither. We ebb and flood as an entirely different element, with the complex, certain rhythm of the sea.

[iii] Thank you to Paula Stromberg for pointing this out.