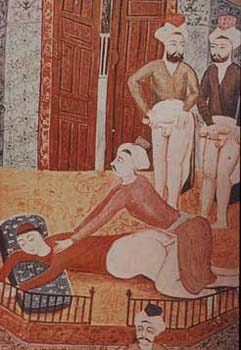 Of course there is no necessary association of same-sex passion with either effeminacy or anal eroticism. Other cultures may eschew the anus as a site of pleasure and prohibition. And men who love men, far from being considered effeminate, are in some cultures held to be more manly than anyone else.[iii] But in Western culture from the 19th century the homosexual is characterized, in Foucault’s well-known formulation, by “a kind of interior androgyny, a hermaphrodism of the soul,” and “a way of inverting the masculine and feminine in oneself.[iv]”No matter how macho his personal style or how tight his sphincter, every gay man, just by being gay, bears some relationship with effeminacy.

A gay man, or some part of his soul, is soft, weak and womanish – though he is not merely debased and contemptible as a woman is inside a patriarchal culture. He has a penis, but it is a means of pleasure among men, instead of a weapon of power. He has a hole; he is penetrable; but this penetration, powerlessness, and wounding is desired and desirable. Luce Irigaray writes, “when the penis itself becomes a means of pleasure among men, the phallus loses its power.”[v] When the anus becomes a means and a site of pleasure, the power of intercourse to effeminate becomes moot. If softness, weakness and vulnerability can be embraced by men, if men do not always have to be on top, then phallic masculinity becomes a joy and a toy. Relationships between men are re-envisioned as potentially playful, erotic and free.

Freud comments on the anal eroticism of all young human beings, noting children’s interest in excretory products and functions.[vii] Property too has a primary anal form. As a little boy is instructed in the significance of his genital superiority, he learns to organize his desires and explorations under the aegis of the phallus. Anality is repudiated; the anus is a hole too much like the mother’s. Just so, the boy’s real prick – the feeling, trembling penis – is something he is no longer allowed to play with. The Oedipal interdict prohibits his desire, and offers instead an insentient, indifferent identity with the Big-Prick-In-The-Sky. The little boy’s struggles against the prohibitions on his sentient body have been described by psychoanalysis. The intended resolution of this “complex” is that the little boy accepts these prohibitions by acknowledging the threat of castration (acknowledging sexual difference), but assuming that he will one day possess the Big Prick of his (dead) father. This resolution is only the “ideal fiction” of mental health. More often, “success is achieved at the price of a rift in the ego which never heals but increases as time goes on” (Freud).[viii] There is a licit identity-with-the-phallus, where he speaks with all the authority of phallic masculinity: insentient, closed, fortified, indifferent. And there is an illicit identity-with-castration, that cannot ever be spoken, where he still feels, trembles, wants.

Men forgo so much when they identify with phallic masculinity. In every area of life and relationship, they are to keep things tough and dry. The Oedipal interdict would keep men devoid of care, passion and playfulness. Feeling is what characterizes the pre-Oedipal child, or the wounded body of a woman. With effeminacy, men claim a capacity for emotion, beauty and connectedness, love of home, personal sharing and adornment, an ecological concern for the web of life.[xi] Instead of the indifferent, transcendent identity with the phallus, they open up to gaiety, grief and awful need.

Many lesbians reject femininity. We see that femininity is wrecked, historically, by the centuries it has functioned as a signifier of genital inferiority and of silence, submission and passivity. We leave it to effeminate men to bring alive the values that inhere in elaborate decoration, attention to surfaces, sensitivity, vulnerability and silliness. If effeminate men can hold and protect the rejected feminine, even as it endangers them to do so, they may teach us to open our own post-Oedipal bodies to risk, complication, and joy. 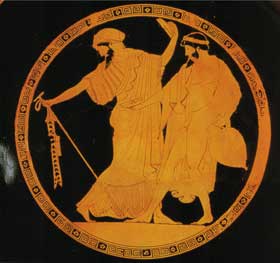 [iii] As, for example, in ancient Sparta or Japanese samurai traditions.

[v] Luce Irigaray, “When the Goods Get Together,” in Elaine Marks and Isabella de Courtivron, eds., (107), emphasis original.

[xi] see Scott Wirth, in Hopke et. al. (eds.), 1993 (201) for a telling list of the effeminacies by which gay men come to “give themselves away,” even while they try not to acknowledge their homosexuality.