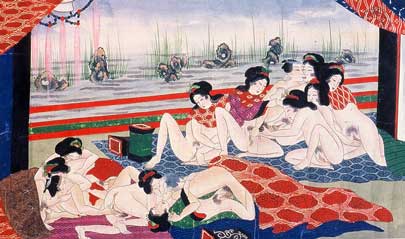 “The goatlike cry of ‘Brother!’
is worse than shouting Fire –
contains more danger. For centuries
now it has been struck out of
our language.”

Sex turns us upside down and inside out, erasing certainties and separations. Lust burns up the boundaries with which we construct a sense of self, differentiated from the world around us and defended from its incursions. Intercourse opens our bodies to an other and initiates us into a deeper and more terrifying knowledge of self. When sex is hot, we experience disintegrations of body and soul.

Sex is a visceral representation of the opening and surrender that every intimate relationship demands. No profound union with another lets us stay intact and self-identical. We become one pair as well as two individuals. Each one surrenders the carefully constructed ego and its wishes. Joseph Campbell comments, “Marriage is not a simple love affair, it’s an ordeal, and the ordeal is the sacrifice of ego to a relationship . . . .” [iii] Men and women in sexual relationships with one another may seek to abjure this truth. The social support their sexuality receives can lure them into believing they are safe; there is no risk; nothing will make them bleed and weep. Safety and self-protection become an aim and an end. But without loss and danger, there can be no relationship. Queer means accepting risk as a condition of our lives. We are exposed, injured, and called to union with another greater than ourselves – our lovers, our queer identity. Self-certainty is destroyed in the fire of desire and its social stigma. It matters little that most GLBTQ people want only the most private and polite exchange of kisses and orgasms. Queer identity opens to the archetype of mad illicit passion, impossible pleasure, unwilling surrender, fire, sex.

In the Middle Ages, same-sex lovers called themselves Ganymedes, after the boy who was raped and abducted by Zeus in the form of an eagle. Today the homophobic stereotypes that surround queer identity carry the image of sexual fire for contemporary society: violated children; abusive priests; seduced hockey players; prison rapists; leather dykes; barebacking People with AIDS. No matter how ordinary and obedient our personal sexual choices, we can enjoy the transgressive power that queer identity evokes.

In Central and Northern Europe ecstatic sex was an aspect of pagan ritual worship of the great goddesses of death and fecundity and the green and mortal god. This sex involved the choreographed experience of power and surrender, psychological depatterning, and ecstatic unity with the other. Christians violently repressed these rituals, and the alternate world view they supported and expressed. 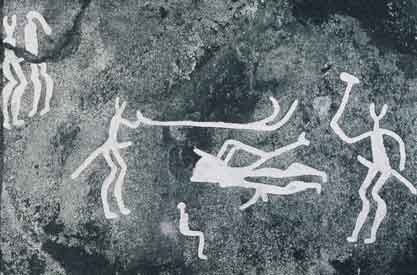 Christianity breaks the world into opposites – self and other, good and evil, us and them, heavenly and demonic – without offering techniques of trespass and reasons for reconciliation. Almost all other world views suggest ways to incorporate the shadow, pay homage to the destructive forces that help to shape inner and outer realities, and envision a unity of self and world. Christianity explicitly repudiates this possibility, consigning all that is other and evil to hell. There fire consumes witches, sodomites, savages, and fornicators of all descriptions. Illicit sex represents the danger – and attraction – of lust and appetite that would have us exceed boundaries and enter the opposite. So sex can turn you into a work of fire, in this world, or the next.

Homophobic stereotypes consign us to hell and identify us with evil. We are irredeemably other. Our sex, however ordinary, has at least this transforming power. We are called to use sexual energy as a technique of the spirit, a way to erase boundaries and achieve metamorphosis. Through the fire, we lose our sense of self as a discreet entity. We become water, mud, blood and stone – and we are willing to defend the earth’s life with our last breath. Sex is radical, fearsome and dangerous when it evokes this unity with all that is other, opening self to world, and world to self.