The Aztec Goddess Tlazolteotl is a bounteous source of life; she is also a raging, destructive power. The Hawaiian Goddess Pele is a hag whose skin is rough and black. She explodes volcanoes in her jealous rage, bringing death and destruction. People of most cultures have goddesses to represent the archetype of the Destroyer.

The angry goddess symbolizes human powerlessness and invites the surrender of puerile demands. She allows us to admit despair, and then begin again, empowered by rage and a passion for justice. In place of this ancient archetype, contemporary Western culture has only a homophobic stereotype – the angry, raging lesbian. 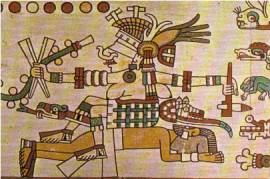 Western culture represses consciousness of all the rage it generates; it has never honoured the Destroyer. In Ancient Greece, the Olympian Gods banished the Furies – that fearful lesbian sisterhood with their taste for vengeance.[1] Christianity would also resist or conquer the Destroyer, which is identified with the Devil and with Death. The dream of modern mental health likewise rejects destructive emotions: aggression, hostility, cruelty, anger, revenge, retaliation. These denied emotions return as the unacknowledged shadow, possessing personal and global relationships. Being queer means we can engage the archetype. By entering its mystery, we might assimilate its power, even while we loosen its grip.

Shadow: Time after time, lesbian and gay people relinquish their rage. At what cost? If we always only forgo our anger, we give away our power. Anger is energy that allows us to use queer identity as a profound interrogation of the straight world. Instead of hopelessly affirming that we are ordinary people, we can use homosexuality to rage against the suffocating weight of ordinariness.

For more writing on this symbol, see these chapters of Orientation: Mapping Queer Meanings: Rage, The Sea, Suffering