The spectre of the evil, predatory homosexual looms large in the cultural imagination. We are their worst nightmare. Abusive priest, prison rapist, chicken hawk … a horde of homophobic stereotypes evoke this multivalent symbol. The predator refers to the ancient archetype of initiation. Zeus sweeps down and abducts the boy Ganymede, who learns to love and serve the god on Mount Olympus. This image of same-sex sexuality as an aspect of initiation is found in cultures around the world. Will Roscoe notes that the archetype of initiation links gay experience with the shaman’s journey, which also involves submission, a shattering of the ego, and a return.[1] 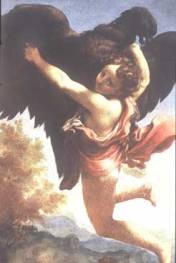 Correggio, The Rape of Ganymede, 1532

The relationship between predator and prey is a basic pattern in all of nature. There is kinship and identity between the lion and the lamb; there is fear and difference. Without the wolf, the deer would not run swift and silent. Without the mouse, the eagle could not have such eyes. Most human cultures honour the kinship of all life with a complex system of myths, prayers and practices. In contemporary Western culture, the figure of a predatory homosexual violating an innocent victim stands as the cultural symbol of this degraded relationship.

Shadow: We may be tempted to over-identify with predator or prey, villain or victim. Queer invites us to a new way of being in the world that allows both surrender and power. Through homosexuality we extend the empathic continuum of life with each person’s individuality and differentiation.

For more writing on this symbol, see these chapters of Orientation: Mapping Queer Meanings: The River, Suffering, Sex, Pedophilia, The Mother and the Maid