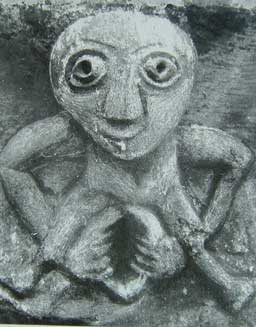 Sheela-na-gig (Celtic) carved on a corbel in the medieval church at Kilpeck, Herefordshire

“Coming out,” we reveal our invisible, secret identity. Unannounced, queer slips back into the nether-world of secrecy and maybe-not. The secret of our sexuality creates a constant tension between inner and outer, visible and invisible, known and unknown. It separates us from other people and places us outside the common and ordinary.

The silence surrounding gay and lesbian identity is a burden we often wish to put aside. And yet this silence also carries its gifts. Henry David Thoreau writes:

“My friend thinks I keep silence, who am only choked with letting it out so fast. Does he forget that new mines of secrecy are constantly opening up in me?”[1]

Thomas Moore calls silence an aid to enchantment. He writes, “Silence is a positive kind of hearing which requires turning off the knob that tunes in to the active, literal life and turning on the one that amplifies the movements of the soul.”[2] In silence, without names and precedents to direct our yearnings, each one of us has to divine identity and find our life’s direction by listening to the movement of our hearts. We are called to a soulful life through silence. Silence can be a meditative practice and a spiritual discipline. It is a way to find the inmost images, and become nourished by the deepest wisdom. The richest veins of creativity and love can only be tapped in silence.

Shadow: “The deadly elasticity of heterosexist presumption,”[3] as Eve Kofosky Sedgwick describes it, makes “coming out” a continual task. Disclosing the secret of homosexual identity takes enormous courage; it has profound effects. “Coming out” creates an environment that can sustain our lives. If we fail to rupture the silence that surrounds us, we will suffocate to death.

For more writing on this symbol, see these chapters of Orientation: Mapping Queer Meanings: Annunciation, Placemaking