The effeminate man is a powerful, living symbol who appears in the myths and dreams of many cultures. In ancient Egypt we find Bes, the god whose breasts gave the first drink. In Greece the infant Dionysus is torn to shreds by the jealous gods. Reconstituted by his mother, he is raised as a girl. Jesus’ wounds evoke a penetration and violation of the masculine image (see John 10:9 for the homoerotic metaphor: “I am the door, by me if any man enter in, he shall be saved, and shall go in and out.”). The effeminate gay man represents this archetype in contemporary Western culture. Homophobic stereotypes like the hairdresser, interior decorator, drag queen and love-slave all speak to aspects of this archetype. 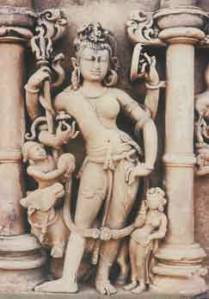 India, 9th C, Ardhanarisvara: the lord whose half is woman, sandstone sculpture

Shadow: The personal ads in any gay paper in North American reveal a glut of “straight-looking, straight-acting gay white men seeking same.” In the context of a prohibition on effeminacy, homosexuality coexists quite comfortably with homophobia, contempt for women, racism, and a heartfelt refusal of the values evoked by effeminate men.