Homophobic stereotypes describe gay people as narcissists who contemplate a mirror image in their lovers. Indeed, we recognize our identity with our lovers. We see and want our double, our self. But this is not the self as “subject” encoded in Western culture; we do not find a self that is whole, complete, and independent. Instead, we catch a glimpse of the fluid, soulful self – weeping, hungry, readily shattered, impossibly needy – in our lover’s eyes, arms, and asshole. 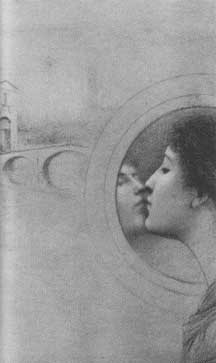 Inside the patriarchal social structures that surround and confound us, woman acts as object to man’s subject. She guarantees his power by her service. He stays trapped in the crippling misrecognition of his self-sufficiency. And perhaps he is also trapped in unconscious envy of her privileged access to feeling and to powerlessness. When two men or two women love each other, they simultaneously embrace subject and object, dependence and independence, passivity and power.

Lao-Tse writes, “he who knows his masculinity and preserves his femininity is the abyss of the world.”[1] Queer is a symbol of nothingness. Holding opposites in a single entity, we symbolize a void that is not negation but indifferentiation – the cessation of separation and conflict.

Homosexuality is associated with art, artifice and artificiality. Indeed, we must use all our creative resources to make a home in the world. Decorating, gardening, cooking and cleaning are examples of placemaking work that is commonly devalued. Our homes are homophile spaces – sanctuaries that nourish and sustain us. Creating retreats from danger, we make habitats where gaiety can flourish. Simple acts of grace and kindness, a gentle voice, a carefully-made garment, a vase of flowers, a comfortable meal – all build space and place where being queer is possible.