Utopia is the only place where being gay is completely possible. The name Lesbian carries this dream. We are citizens of an imaginary country on the Mediterranean Sea, where love between women exists in profusion, in the open air, sun-washed and bright. 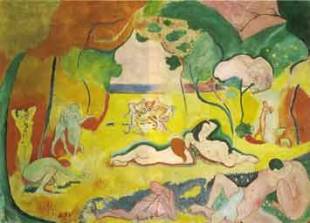 Lesbians everywhere approximate this Utopia with whatever resources we can muster. The picture “Joy of Life,” made by Henri Matisse for lesbian writer Gertrude Stein, evokes a world for women that can include ebullience, sensuality, freedom of movement, and a voluntary relationship of equal partners. Walt Whitman writes:

“I dreamed of a city where all the men were like bothers,
O I saw them tenderly love each other –
I often saw them, in numbers,
walking hand in hand;
I dreamed that was the city of robust friends –
Nothing was greater than manly love –
it led the rest.”[1]

He evokes a world for men that can include tenderness, loyalty, and open affection. These are utopian visions, homeless in the world we know. Each time we represent ourselves and our desires in public language, visual culture, personal space and social relationships, we invoke this joyous Utopia.

Shadow: Queers get used to defending their relationships from criticism and hostility by stressing their positive values. It can be hard to let others know when relationships are not working, and find the help we need to seek change or to leave abusive relationships.

For more writing on this symbol, see these chapters of Orientation: Mapping Queer Meanings: Another Country, Wildness