All our lives, we hear from the homophobes that women who love women are not real women, and men who love men cannot be men. In place of the dreary, static identities assumed by male and female, we become both and neither. With this transgression, we show that gender is not a simple fact that quietly and irreversibly emerges from the realm of nature. “Man” and “woman” are social identities, carved out brutally by history. They are enforced and exploitative economic relationships. Homosexuality demonstrates opposition and invites resistance. 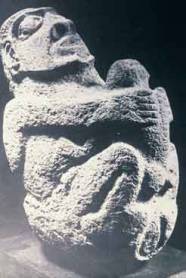 Sechelt First Nation, Salish People, Northwest Coast Indian. The “Sechelt Image,” height 20”. Wilson Duff comments, “His head is powerfully masculine, and he clasps a huge phallus. . . . Below the phallus is a vulva. The phallus has arms, which clasp the man. His ambiguity is absolute: ‘male strength’ is also ‘mother and child’.”

The androgyne or hermaphrodite – a being both male and female – is an ancient symbol of wholeness that points to a possible future and evokes a mythological past. The image of the Androgyne is found in cultures around the world, including pre-Columbian Mexico, Africa, Ancient Greece and Pagan Europe. In India, the god/dess uniting two sexes in a single being is viewed as the primal force. Plato’s Symposium describes the original human as a being incorporating both sexes. In North American First Nations, the contemporary term “two-spirit” refers to a traditional ceremonial identity in which a person unites male and female sensibilities, tasks and affections. These individuals are often shamans, divinely inspired to follow the two-spirit path.

Becoming queer, we sacrifice all the self-certainty and social approbation that gender identity affords. We may seem monstrous – fabulous, horrible – to everyone who stays outside the labyrinth, stuck on one or another side of gender difference. In recent years, gender-conforming gays and lesbians have become preferred spokespeople for the community. They have proved effective at advancing our claim to be the same as everyone else, but ineffective at making space for queer difference.