Homosexuality is linked with animals and animality. Jerry Falwell calls us “brute beasts.” We are seen to represent the carnal and sensual instead of the rational and spiritual, as if there were no dialogue between these realms. And yet the word “animal” originates in the Latin anima, meaning both soul and breath. Carl Jung used the word “anima” to describe the female element in every male, always so carefully concealed from others and oneself. 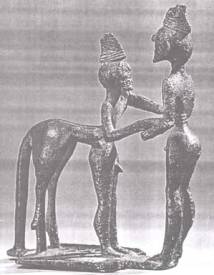 We live in a society where human beings feel cut off from their identity with nature. The language of beasts seems strange and incomprehensible. The ancient and enduring connection between people and animals has been lost to consciousness, along with the emotional energy and intuitive wisdom it supplied. Queer people can celebrate their animal nature. We can claim animal ancestors, totem animals, and animal powers. We can create queer as a lived understanding of biological diversity. Homosexuality invites us act and advocate for the wild.

Shadow: The animal nature requires attention. It can be attended through denial, expressed through pathologies and exorcised with self-righteousness. Or we can choose to honour the Animal integrate the Beast heterosexuality would project onto an “other.”