Homosexuality is a symbol of disease, and disease is a symbol of punishment. The death of millions of Native Americans from diseases brought – at times deliberately – by Europeans was attributed to divine retribution for the sin of sodomy.[1] According to fundamentalist Christians, AIDS is evidence there is a god who hates homosexuality. The notion of disease as a punishment for transgressions against approved ways of being resounds in many new age healing philosophies. It is the cultural context in which modern science looks for a gene to determine homosexuality. When we advocate for human rights by describing homosexuals as suffering a biologically-constituted difference, we draw on and affirm this symbolism. 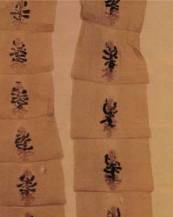 The broad fish tapeworm may grow to 35 feet and live for 10 years inside a person’s intestine. Each mature segment comes complete with male and female sex organs resembling Japanese characters.

In the mechanistic world-view of modern science, questions about the meaning of life are answered by the body’s reproductive functions, while anything else is represented as pathology. Celebrating what is queer invites us to reconceive natural systems, acknowledging their actual, observable capacities for mystery and exuberance. Instead of viewing homosexuality as a permanent, pathological state, we can understand it as a joy and a calling.

Shadow: Rising rates of HIV in young gay men; reluctance by lesbians to seek medical treatment – the link of homosexuality with disease and disease with punishment is a vicious circle in which many lives are lost. As activists we can acknowledge the power of these symbolic associations, and possibly trace their roots, by remembering that in many traditional societies disease is believed to emerge from soul-loss. It is the job of the gender-variant shaman to cure the sick by restoring the soul.

For more writing on this symbol, see these chapters of Orientation: Mapping Queer Meanings: The Body, Dirt, Fluidity