Our identity as gay and lesbian people is, in part, a relationship with vulnerability and loss. Suffering and death are ever-present as a possible future and a collective past. 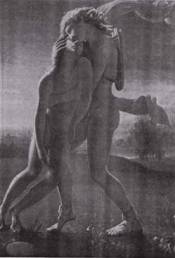 In 6th Century Byzantium Emperor Justinian “ordered that all those found guilty of homosexual relations be castrated. Many were found at the time, and they were castrated and died.” In Panama in the 16th century, the Spaniards fed native people accused of sodomitical practices to dogs. Throughout Europe during the Inquisition Christian witch hunters captured strong women and gentle men. Their fingers were crushed in vices, pieces of their flesh were torn away with red-hot pincers, and they were burned to death. In the 20th century homosexuals were imprisoned, tortured and murdered by Nazis. Those who survived the concentration camps found themselves the only prisoners not entitled to reparation. Many were imprisoned again by post-war German courts. In the past few years, the news has carried stories of people burned alive for gender transgression, bludgeoned to death for being gay, cut to pieces, buried in sand up to their necks and stoned to death, shot, lynched, firebombed. Queer youth hang themselves, blow off their heads, and OD on drugs in terrifying numbers. AIDS consumes the most precious, beloved spirits. Gay and lesbian people carry the burden of this suffering, whether we speak of it or not, whether we give it our attention or avert our gaze. Centuries of suffering smoke and burn inside the marrow of our bones.

So much of contemporary Western culture is intent upon avoiding risk. Apathy is the preferred stance and predictable posture. Suffering is inflicted on others – those who are marginalized, far away and silenced. The fear of suffering paralyses identity in destructive structures of disavowal. Queer people need not be paralysed by fear of suffering; we can be empowered and enraged by suffering. We face fear every day. Death is around the corner, inside the mailbox, under the lamppost, in the eyes of the next-door neighbour. Fear keeps our hearing sharp and our eyes clear. It makes our footsteps swift and light. Suffering is our familiar, an intimate spirit at our shoulder who shapes and informs our lives.

Shadow: The fight against suffering and oppression gives our lives meaning and purpose. People can stand incredible hardships when convinced of their meaningfulness; they can be crushed by very little when they live without a sense of their place and tasks in the world.

For more writing on this symbol, see these chapters of Orientation: Mapping Queer Meanings: Suffering, Effeminacy, The Mother and the Maid, Limits