In The Merchant of Venice Shakespeare employs anti-Semitic symbolism to portray an archetypal conflict between individuality and community, innovation and tradition. In the rhetoric of third-world demagogues and other homophobes, homosexuality serves as a symbol of this conflict. Queer is described as a peculiarly Western perversion – the product of a decadent capitalist culture and its excesses. 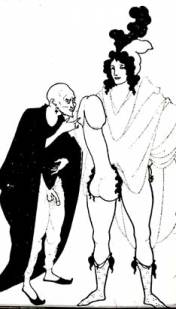 Aubrey Beardsley, The Examination of the Herald, 1896

It is true; homosexuality creates an antonym to traditional lifeways and historic forms of social organization. Queer passions do not fit into the interstices of the patriarchal family, the two-gender system, and the endless repetition of hereditary privilege. Furthermore, the public voices and private lives of contemporary queers have no exact historical precedent. Although same-sex passions exist in various forms in every culture around the world, only in contemporary capitalist cultures does homosexuality represent as an alternative way of being. We have made homosexual desire into a personal identity and a global community. Queer shapes our lives and our souls. While acknowledging the pain and destruction caused by the operations of capitalist economy, we can also embrace the possibilities it allows. Individual autonomy, chosen family, gender parity and global equality are always-broken promises inside the capitalist system. The possibilities we develop in queer lives and identities point to these promises that can never be realized without radical social change. Yet right at the heart of contemporary economic practices, homosexuality unfolds as a space where these promises are pledged.

Etymologically, the word “decadence” speaks of decay. As we enjoy the pleasures of homosexuality, we can also recall the link made in pagan practices between sensual excess and a sacred realignment with the fecund natural processes of death and decay – the deepest of Earth’s mysteries.

Shadow: We sometimes advance the notion of homosexuality as a mere difference in taste, like preferring pineapples to potatoes. In this effort to make homosexuality unthreatening, queer identity is drained of its magic and meaning, becoming a symbol of nothing more than a niche market.