The Androgyne is a symbol of wholeness, an original innocence from which we are wrenched away by the requirements of gender, culture and maturity. 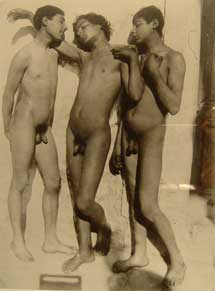 The Dogon of Africa believe that every child is born with both a male and a female soul. At puberty, one soul is chosen and the other is cut away with cliterodectomy or circumcision. Without this violent excision, no one would develop the inclination for procreation.

In Western culture, learning the requirements of sexuality is equivalent to the paring away of capacities. Boys forgo sensitivity, receptivity and inwardness to assume the perks of manhood. Girls learn to denigrate and fear their power and independence to become acceptable women. These psychic excisions are violent and painful mutilations. Often the wounds refuse to heal. Queers are called away from the carnage, back to the carefree joys of an ideal childhood. Like Peter Pan, we say “I won’t grow up,” and it gives us wings. So long as we avoid the tasks and wounds of adult male and female sexual identities, we are identified with the archetype of innocence.

Mark Thompson writes, “For me, gay people represent the archetype of innocence, a shaman’s tool that allows access to a more primal world, one where his / her work is done.[1] With his notion of a “shaman’s tool,” Thompson suggests a way to claim an innocence that is not constituted in denial, withholding, and fear of life experience. The innocence he describes is a way of meeting inner and outer worlds with optimism and trust – opening like a flower, bending towards the light, responding to the inner impulse.

Shadow: We may be tempted to counter the association of homosexuality with evil by self-righteously claiming our innocence. We invite pity and seek acceptance with a litany of pain and loss. This public mask of wide-eyed innocence disempowers us. It keeps us from using homosexuality as a space of agency and a form of power.

For more writing on this symbol, see these chapters of Orientation: Mapping Queer Meanings: Innocence, The Mother and the Maid