“Fairy” is a common term of homophobic abuse that gay men have reclaimed as a symbol of their magic powers. Since the 1970’s “fairy” or “faerie” has been used as a positive name for radical gay identity. Fairies are historically linked with gender transgression and homoeroticism in the pagan cultures of Europe. The related term “faggot” is derived from fagus, the beech tree around which fairies dance.[1] Faeries soar with queer spirit. 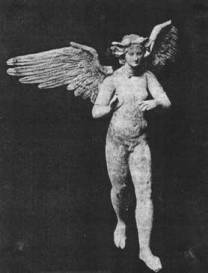 In ancient Greece, the winged gods Eros and Hermes represent the archetype. Eros is the androgynous god described by Plato as the craving and pursuit of wholeness.”[2] Hermes is the god of crossroads, limits and thresholds. Today, queers represent this liminal realm. Lodging in the space between established alternatives – male and female, visible and invisible, possible and impossible – we guide souls from the constricting limits of what is, to the unknown, unknowable, but nevertheless yearned-for possibility of going beyond this.

Fairies have a contradictory nature – they fulfill humble tasks, yet possess extraordinary powers. Like queer people, they are prone to sudden transformations; they possess hidden abilities and influences that can be suddenly revealed.[3]

Shadow: Air is without body, weight and gravity. While we fly free with frivolity and lightness, it is worth remembering that fairies are also rooted in earth. They hide in the leaves of plants and act as the spirits of landscape and place.