Queers function as icons in contemporary Western culture: this is what it looks like, when you listen to the inner impulse, love past the point of safety, find the courage to be what gods intend.[1] 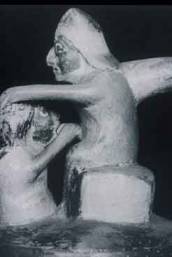 With patient scrutiny and breathtaking leaps, becoming queer means we surrender to the Great Reality deep down within us: an unexpected destiny, a collective identity, a power greater than ourselves. Awakening to our identity, struggling against it, being seized by a knowing that implicates us utterly – coming to terms with homosexuality follows the archetypal pattern of spiritual awakening.

The sky god of Judeo-Christian tradition hates and punishes homosexuality. Colin Spence notes that in the early days of the formation of the Hebrew nation, the Jewish people “were surrounded by cultures which celebrated male temple prostitution.”[2] Hebraic injunctions against sodomy are injunctions against these eunuch priests and their magical powers. Christianity found the prohibition against sodomy met the needs of patriarchy and imperialism. It kept relations between men under control – no rapture that might rupture the holy offices of trade and inheritance. Queer harkens back to pagan spirituality and invites us to imagine new forms of social organization.

James Baldwin suggests that both racism and homophobia begin with a concept of god that “is not big enough.” He writes, “To be with God is really to be involved with some enormous, overwhelming desire, and joy, and power which you cannot control, which controls you . . . . I conceive of God . . . as a means of liberation and not a means to control others.”[3] Gay and lesbian people are called to enter a gigantic imagination of god. Divine is also a verb. Queer means walking through the world divining, with intuitive recognitions and prophetic insights. Despite the absence and denial that confronts us everywhere, we divine the love that creates us as GLBTQ people. This love is an overwhelming, unpredictable power that can only be god.

Shadow: To accept the horror of history, and still believe we can weave a future loving nature, honouring women, embracing homosexuality and dismantling whiteness, we need a faith past all understanding. Perhaps we can simply admit to not knowing. Not knowing is humility, emptiness, readiness. Not knowing is an open mind and a heart that can admit what is transforming, impossible.

For more writing on this symbol, see these chapters of Orientation: Mapping Queer Meanings: Sky God, The Tree God

[1] This sentence is inspired by M. R. Ridley, seminar at the Sorrento Centre, Sorrento, B.C., 1999. The source of the phrase “we surrender to the Great Reality deep down within us” is the Big Book of Alcoholics Anonymous, (55).